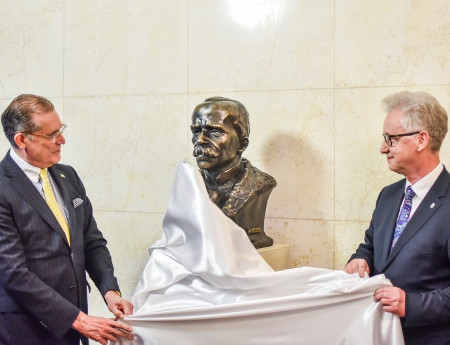 The sculpture honours the eminent Brazilian writer, lawyer, scholar and politician. Ruy Barbosa (1849-1923) actively supported the Polish efforts to regain independence in the early 20th century, especially during the international peace conference in the Hague in 1907.

Ruy Barbosa admired the determination and strong sense of national identity of the Polish people. His respect towards these noble qualities inspired him to defend Poland’s right to independence with great dedication. His bronze bust created by Letícia Dornelles was placed in the hall of the first floor of the old part of the Jagiellonian Library. The sculpture was officially unveiled by the Rector of the Jagiellonian University Prof. Jacek Popiel, the Ambassador of Brazil to Poland Hadil Fontes da Rocha Vianna, and the Consul General of Brazil to Kraków Grzegorz Hajdarowicz.

‘Ruy Barbosa loved Poland because he loved freedom’, said the Brazilian Ambassador, ‘in the 522-long history of Brazil, there were few people who so fervently fought for freedom, justice and human dignity. The situation of Polish nation under partitions, denied the right to self-determination, was a call for action for one of the greatest and most distinguished Brazilians, a man of great intellect and morals. I strongly believe that there is no better place for his bust than the library of the Jagiellonian University – the higher education institution that has significantly contributed to the development of humankind in many different fields for many centuries. The dedication to human dignity, love for knowledge, and human progress are what Rui Barbosa and this institution have in common’, explained the Ambassador.

The JU Rector Prof. Jacek Popiel stressed that the unveiling of the bust of this eminent Brazilian takes place at a special moment, when the danger of the outbreak of a war in the Ukraine reminds of human attitudes displayed during the Polish struggle of independence. He also referred to Prof. Franciszek Ziejka, who initiated the development of Polish studies programmes at Brazilian higher education institutions as well as Prof. Henryk Siewierski, who has shown that Polish-Brazilian relations should be based on the education in the field of each other’s language and culture.

The ceremony participants also included Thiago Cionek, a Polish-Brazilian footballer. In his address, he pointed out that in 2020 Poland and Brazil celebrated the 100th anniversary of the establishment of diplomatic ties, but the actual relations between both nations developed much earlier, when Poles start to emigrate to Brazil for economic reasons in the second half of the 19th century. The emigrants included the Mr Cionek’s great grandmother and great grandfather. Over 100 years ago the footballer returned to the country of his ancestors. He became a Polish citizen in 2014 and was a member of the Polish team during the 2016 European Championship and 2018 World Cup.

‘Today, I am honoured to pay tribute to Ruy Barbosa, a great statesman who was one of the very few people who supported the Polish nation in the time of need, a true friend of Poland’, said Thiago Cionek. 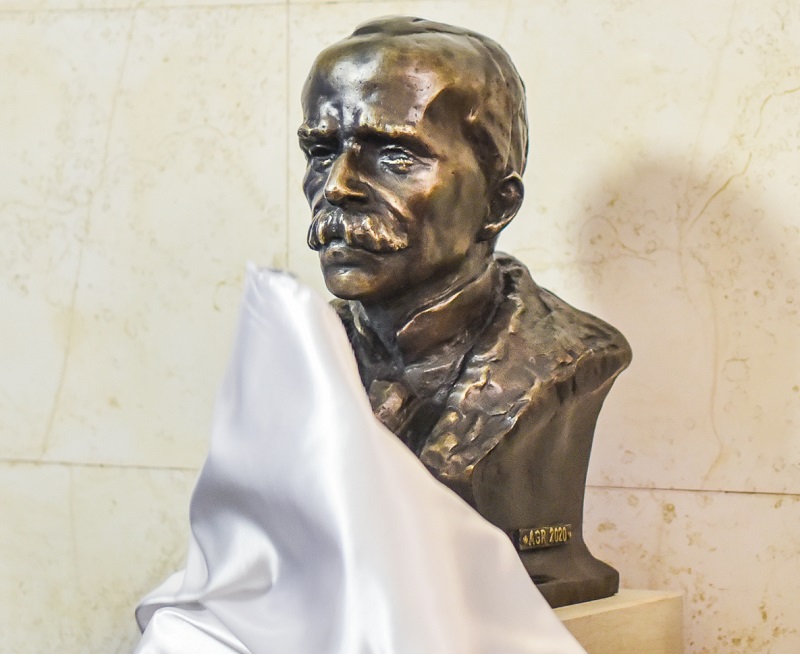