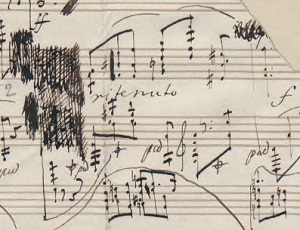 The Chopin autographs from the Jagiellonian Library collection have joined to the UNESCO 'Memory of the World'.

The four Fryderyk Chopin's autographs from the collection of the Jagiellonian Library have been entered to the National List of the UNESCO 'Memory of the World' Program.
The autographs document the musical activity of Fryderyk Chopin, the greatest Polish composer and one of the greatest composers in the history of music.

The Memory of the World program was established on the initiative of UNESCO in 1992 to protect the documentary heritage of mankind. The Polish National List of the UNESCO "Memory of the World" Program contains the most valuable documents for the cultural heritage and Polish tradition, located in Polish institutions or abroad, of great importance for both present and future generations.