History of the Jagiellonian Library

History of the Jagiellonian Library 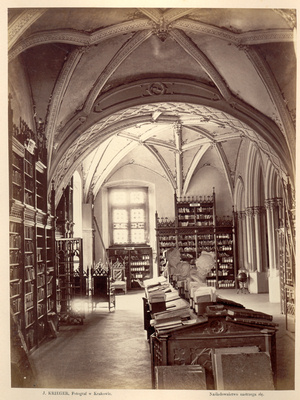 The Library dates back to the 14th century. Evidence of this can be found in three codices from that time, which were in use at the Wszechnica Kazimierzowska.

In individual departments, colleges and hostels, students assembled manuscripts and scholarly books in the areas of philosophy, law, theology and medicine. These works were usually the gifts and bequests of the professors and pupils. Jan Isner, Mikołaj Kozłowski, Tomasz of Strzempin, Jan Dąbrówka, Maciej of Kobylin, and Andrzej Grzymała from Poznan are just a few of the long list of book donors. The largest collection, primarily in the fields of theology and liberal arts, was located in the Greater College, the main seat of the university.

After the fire and the reconstruction of Collegium Maius at the turn of the 15th century, the Library was given a new location in a separate wing, thanks to the bequest of theology professor Tomasz Obiedziński in 1515. The gothic reading room, Sala Obiedzińskiego, was named after him. From this time until 1940, the Jagiellonian Library was located in the Collegium Maius building.

In 1536, Bartłomiej of Lipnica established a foundation with an endowed custodian whose responsibility was to provide regular access to the books. In 1559, Benedykt of Koźmin left the library 50 Polish zlotys, with the interest to be used for the purchase of new books. From that time, the collection increased not just thanks to donations but also due to systematic purchases.

In the 16th century, the Library was the pride of the University. Its collections continued to increase systematically. It was visited by many famous people, including kings. During the 17th and 18th centuries, there was somewhat less generosity, as well as a lack of proper control over the materials being added to the Library's collection.

The Library improved under the care of the National Education Commission, established in 1773, which, as part of the reform of the Krakow University, awarded the Library the needed stable funding. As a result of Hugo Kołłątaj's initiative the remaining departmental collections were added to the Library. From that time, the Library became an all-university library with a public character. The holdings included 1,926 manuscripts and 32,000 print volumes. During this period the Library's collection was organized and catalogued.

Poland's loss of independence due to the partitions somewhat hampered the development of the Library. However, under the management of Jerzy Samuel Bandtkie (1811-1835), the collection was expanded and the building enlarged. His successor, Józef Muczkowski, played a large role in organizing the collection, particularly the maps, calendars and ephemera. He also began conservation work on the building.

The Library particularly flourished under the direction of Karol Estreicher (1868-1905), the creator of the Polish Bibliography. Thanks to him, the number of Polish items increased significantly, to 85,000, and the Library took on a national character - "Bibliotheca Patria".

When Poland regained its independence in 1918, this had a significant impact on the Library's development. The catalogue was reformed, the collection was updated, and in 1931-1939 a new building was constructed. The collection was transferred to the new building in 1940, during the German occupation. At this time, it was renamed Staatsbibliothek Krakau. Poles, particularly scientists and youths studying in secret, were allowed unofficial access to the collection thanks to the help of the Polish librarians. They also saw to it that the collection did not suffer significantly.

After World War II, there was a dynamic increase in the Library's collection, particularly in new publications, which grew to around 40,000 volumes per year. This was made possible thanks to the regular receipt of legal deposit copies of Polish publications, which could be actively exchanged for other publications, particularly with foreign libraries. Gifts of single works also continued, as well as donations of enormous collections. Among the donors were many Polish community centers. Only the purchase of foreign scholarly literature was limited due to the high cost. From 1961-1963, the Library was renovated to enlarge the shorter building.

The  turning point in the development of the collection occurred in 1969. At that time, an archive of Polish publications was begun. One copy of each pair of books received from Polish publishers was designated for this purpose. The regulations regarding the legal deposit copies were expanded in 1996 to include audiovisual and electronic media. The rapid growth of the collections made it necessary to enlarge the Library. The first enlargement was carried out in 1961-1963, to expand the lower portion of the building. During 1995-2001, a new wing was built.

The last decade of the 20th century was a period of many changes for the Library. In addition to the work involved with building the addition, the Library's circulation, its equipment and future functioning also required a number of changes to its organization. The most important change was the computerization which began in 1993. Thanks to a donation from the American A. Mellon Foundation, Library purchased equipment and software - the Virginia Tech Library System (VTLS). All the basic processes of the library were computerized: acquisitions, cataloguing and processing, information and circulation. The computer catalogue now contains all of the Jagiellonian Library's printed matter from the 19th and 20th centuries. And at the same time we are retrospectively entering information about items in the collection that were printed in earlier times.